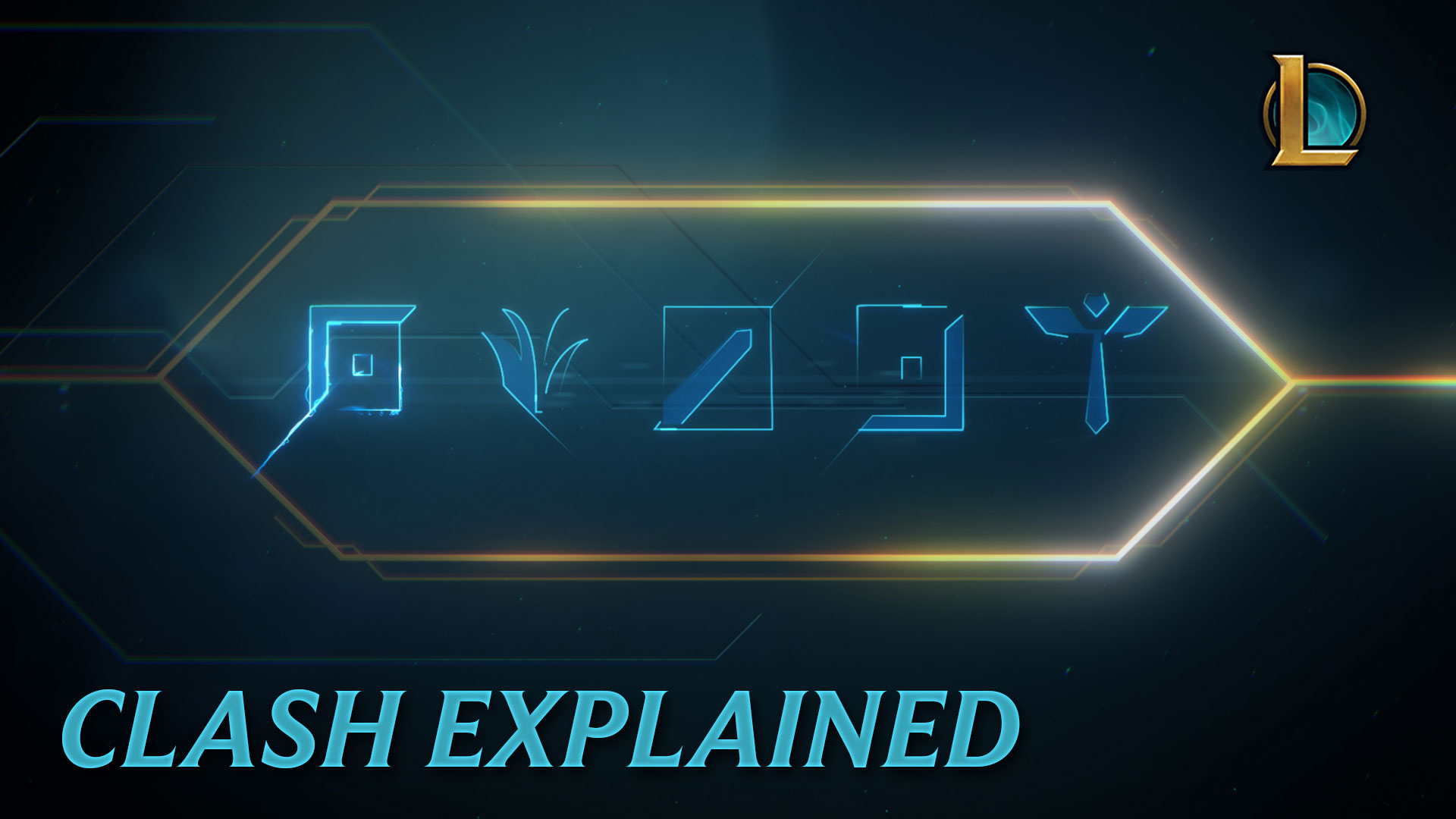 On May 20, team creation opens in-client to play Clash - League’s new competitive mode for premade teams. With this official launch, we’ll have bi-weekly tournaments where your team can compete for big rewards.

If you want to run through an interactive Clash demo, check out the Clash microsite.

Clash will run on the weekends from Friday to Sunday.

Here are dates for the first four Clash tournaments (we’ll be sharing the full schedule later):

Clash is a new competitive game mode where you and four players can team up to compete against opponents at your skill level to win a tournament every other weekend. You can play one, two, or all three days.

When you enter, your team will start in a 4-team bracket with players of your skill level. If you win both matches, you will be promoted into an 8-team bracket with all the other winners the following day. Coming out on top here will put you into a 16-team bracket for a shot at the top prizes on the last day.

You can start your Clash journey in a 4-team bracket on Friday, Saturday or Sunday, but only teams that enter on Friday and play each day can win the entire tournament. If your team is eliminated, you’ll receive your rewards and drop out, but you can re-enter the next day to play in a new bracket for more rewards.

To join or create a Clash team, you need to have:

Each team has a captain who is responsible for adding or removing members and setting up their team for Clash. Captains can start inviting their squad from the Monday before the start of a Clash tournament. In the Clash tab, they’ll pick a team name, logo, and tag to represent their team for the weekend. If more than one teammate owns a specific team logo, you’ll unlock chromas of that logo and show opponents you’ve played before.

Every team member must submit at least one-ticket entry into Clash (read more below).

When you have been entered into a bracket, you will compete with that team for the whole weekend - win, lose or re-entry, so make your best squad upfront!

Teams will be disbanded at the end of the weekend so you can form a new team for another Clash tournament or remake the same team.

As a measure against smurfing, you’re required to input a valid mobile phone number to participate in Clash. This number can only be tied to a single account and will be linked for 6 months. If you unlink a phone number, you must wait out the 6 month time period before linking it again. When you enter a phone number you’ll be sent a code to verify your account. Repeated incorrect code entries will temporarily lock you out of the verification step. This feature is for Clash only, and is not considered multi-factor authentication.

You can verify your account through SMS in the Settings menu or in the Clash tab.

A Clash tournament is only competitive if you get to play against people of your skill level. Smurfing is something we take very seriously in Clash.

When your team first enters Clash, you’ll be placed into a single-elimination 4-team bracket against teams at the same skill level. If your team wins both of your matches, you will proceed to an 8-team bracket the following day, and winning that puts you into a 16-team bracket on the last day. Only teams that enter on Friday and play each day can win the biggest prizes, but you can play as many days as you want throughout the weekend.

On each day, there is also a consolation (lower) bracket held for teams who lost the first match of each day to continue playing. Those teams won’t be able to progress to the next day’s play, but they’ll face off against the other teams that lost to earn better prizes.

Participation is flexible - you can enter on any day of the tournament. If you win Friday, but can’t play Saturday, that’s cool too. You can skip it and enter Sunday on the same ticket entry!

You are guaranteed to play a minimum of two matches each time you enter, and your ticket can last all three days if you keep winning.

To ensure your team gets entered into a bracket, every member of your team will need to lock in during the 30 minutes before the first match begins. If any members of your team do not lock in, your team won’t enter into the bracket. After locking in, you will not be able to start any other games of League.

Unlike ranked, teams will be assigned a tier for the duration of the weekend. The tiers will roughly divide teams into four sections - Tier IV at the lowest and Tier I at the highest. These tiers are “bottom-weighted”, so there’ll be more teams in Tier IV. You’ll see your team’s tier adjust as you add or remove players.

Individual tiers are determined by your Flex or Solo/Duo ranking - you’ll also have a rating that is derived from your previous Clash history. Team tiers take a weighted average of the roster, but it heavily prioritizes the highest-skill players—so it’s likely that comps of players with vastly different skills may have some tougher matches ahead. You’ll see a popup if your team has a mixed skillset.

The substitute system in Clash is intended for emergency swaps. Each sub is on the roster for a single day and is removed from the team when the day concludes. The window for substitution opens up during the lock in phase. By hovering over a username in the Clash tab, a button will appear allowing the Captain to sub the player out.

Substituted players can only enter one ticket, and will receive loot rewards as if they were on that team. Rostered players with an active ticket entry who are subbed out will receive rewards as if they had gone 0-2 that day, unless the team wins the bracket, where they will be re-added to the team the next day. Players cannot be substituted on the team’s first day of play—if you need to sub a player out, your team should lock in with a five-person roster, and then substitute players back in when needed on the following days.

To be considered an eligible substitute, players must:

Players can substitute for another team while being a rostered member of a different team, but they can only enter the tournament with one of those teams. Teams can only sub one player per day.

Subbed out players can reclaim their spot on the roster before lock in phase ends on any day..

Before the match begins, you’ll encounter several features to help you figure out the best strategy to claim victory. First up is the scouting page, where you can check out stats and info about your opponents to help your pick/ban strategy.

You’ll see your opponents’ win rates and KDAs with their most played champions in ranked, their highest champs in terms of mastery, and their previous Clash data.

Next up, in champ select, you’ll be using the draft format you may have seen from the LCM/SLS - two ban phases, and two pick phases. Don’t get caught off guard! The team captain makes all the ban decisions for the team.

All champions are unlocked in Clash, so don’t worry about figuring out that complicated three-person trade from solo queue.

Clash also features a “sudden death” mode to keep matches at a fixed length. After 60 minutes, towers will become more fragile and easy to push. By 65 minutes, structures will start to damage themselves at a fixed rate in order (towers in order, then inhibitors, then nexus turrets, then the nexus). By 70 minutes, one team will have won the game. This is considered a last resort and is very unlikely to happen, but we need to give all Clash matches a fixed maximum length.

/pause and /remake are disabled during Clash. Matches cannot overrun or be remade to prevent extended days of play. There’s a potential for griefing or trolling through abuse of these features.

IMPORTANT: Shortly after launch, we will be changing Clash's ticket system. In the new system, there will be two types of tickets to choose from (both give you the same entry into Clash) - one “basic” entry, and one “premium” entry (names WIP).

You’ll need a ticket to enter Clash. One ticket lets you participate, but if you’re confident, a premium entry is available for five tickets. Each teammate chooses their own ticket entry and their individual rewards scale off that. Once your basic or premium entry is set (when your full team locks in before a match), your entry can’t be changed.

You can get tickets from missions, a teammate, or in the store. Every two tournaments (once per theme), completing the Clash mission unlocks a ticket. A teammate can offer a one-ticket entry to anyone else on their team roster.

Tickets are a method of entry unique to Clash. We’re introducing ticket entry for a couple reasons. We hope that all teams are committed to see each tournament through, and tickets are a way to keep the games high-stakes.

To obtain a ticket, you can:

You can also enter a single ticket on behalf of a teammate if they don’t have any. You can do this for multiple players on your team.

Winning a bracket will get you a trophy of the corresponding tournament theme.

Your highest-level trophy will show up at the nexus for all your Summoner’s Rift games for two weeks after the tournament ends. After that, it’s time to win a new one! Trophies also display on your profile page.

Every time you win, you’ll earn 200 Victory Points which are used to unlock Banners, a new type of reward which shows up on Summoner’s Rift and in your profile.

Your VP scales on the tier your team plays in (higher tiers earn a VP bonus per first win) and your personal ticket entry. As you progress your VP totals up over two tournaments, and you can unlock banners and new team icons. Remember, even if you lose, you can re-enter the next day for more chances at VP!

Your VP will not persist past the theme, but you’re automatically granted any rewards you meet the threshold for. Any banners you unlock will display on your Summoner’s Rift games in your chosen lane. Also, as you collect banners over the course of the Season, you will upgrade the appearance of the frame that holds the banner in place.

Every player who enters into Clash will receive a Clash Orb or Clash Capsule. You’ll receive loot when you exit the bracket (when you lose or end up winning the whole thing). That orb or capsule is guaranteed to contain an XP boost and a new team logo for the next tournament.

The capsule contents upgrade depending on your ticket entry and how far you get into a tournament.

Here’s how your final placing for 1-ticket entry matches up with rewards.

** unlike Hextech Chests, Ultimate tier skin shards received from Clash Capsules will not auto-redeem to a full Ultimate tier permanent. Just a heads up!

This is one of the only ways to convert BE (or the ticket obtained via the mission) to cosmetic items!

And for 5-ticket entries:

* This is only in the case of forfeits or no-shows after winning a bracket, or winning these brackets on day 3

** Unlike Hextech Chests, Ultimate tier skin shards received from Clash Capsules will not auto-redeem to a full Ultimate tier permanent. Just a heads up!

*** There are a lot of combinations of these, so we didn't list them all out.