A new system will hand out Restricted Chat punishments rapidly to players within a few hours of negative behavior. When an account has Restricted Chat, the number of chat messages a player can send while in game is limited.

HOW DOES IT WORK?

If signs of toxicity are detected, your account will have Restricted Chat enabled. When this feature is active, you will have a limited number of chat messages you can send while in game. As you continue to play the duration of the match you will unlock additional chat messages that you can send. In order to completely remove Restricted Chat from your account, you will be required to play a specific number of matchmade games.

WILL I STILL BE ABLE TO SEE CHAT MESSAGES FROM OTHER PLAYERS?

You will still receive chat messages from players on your team. However, [ALL] chat will be disabled.

IF I CAN'T CHAT IN-GAME, WON'T I BE BANNED FOR FAILURE TO COMMUNICATE?

Players are never banned for not communicating through chat in-game. In fact, a large portion of our games are completed with very few words being said at all. If you feel you need to communicate to your team, then you should use our improved Smart Ping feature. Smart Ping will allow you to communicate all vital information you might need in a manner that is much quicker than typing. Smart Ping allows the following commands to be given: On My Way, Enemy Missing (MIA), Be Careful, and Assist Me. 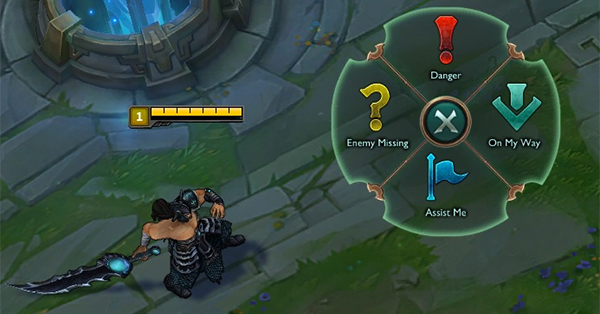 WILL OTHER PLAYERS KNOW IF I HAVE CHAT RESTRICTIONS ON MY ACCOUNT?

HOW WILL I KNOW IF I HAVE RESTRICTED CHAT ENABLED ON MY ACCOUNT? Every time you finish a matchmade game of League of Legends, you will receive a message notifying you how many games of Restricted Chat you have left.

WHEN WILL MY CHAT RESTRICTION BE OVER?

Whenever you finish a matchmade game, you will receive a notification that tells you how many games of Restricted Chat you have left: HOW DOES THE SYSTEM DETERMINE THAT YOU NEED TO BE CHAT RESTRICTED?

Secondly, we have a sustem that's been analyzing millions of chat logs, and become quite good at detecting whether a conversation in a game is negative or positive. I presented some of this work at the previous Game Develper's Conference. It's an intereting system because the more chat logs you feed the system, the more accurate it becomes at determining whether a player communicates more positively or negatively than the average player in League of Legends.

WILL OTHER PLAYERS KNOW IF I HAVE CHAT RESTRICTION ON MY ACCOUNT?

Everyone responds a bit differently to rewards and punishments. For Chat Restrictions, we're seeing about 67% of players improve the way they communicate after coming out of a chat restriction.

For players that don't improve after a few experiences of chat restrictions, the systems will start assigning some bans, more severe chat restrictions, or even remove players from certain queues. We don't expect a "one size fits all" punishment or reward, so the key is giving the system time to figure out which specific reward or punishment works for a particular player.

I DON'T FIND THE SYSTEM IS MORE EFFECTIVE THAN BANS.

We actually use restricted chat bans because they are more effective than game bans. We find that game bans nudge a lot of players to create smurf accounts and simply shift their negative behaviors to low levels and overall, that's a worst experience for the community.

WHY DO I KEEP GETTING MORE CHAT RESTRICTIONS?

A way to tell if you're improving would be this: You finish your chat-restricted games, get issued 20 games. You finish those, you get issued 17. That would mean in the course of those 20 games, you improved but your standing with the would-be Tribunal is still not very good. You're ever-so-slowly moving in the right direction, though.